Over the course of the last few years our Tampa production company has enjoyed participating in the 48 Hour Film Project, a world-wide competition that challenges filmmakers to write, shoot, and edit their own short films in only 48 hours. It’s become a bit of a tradition for the Litewave Media crew and we’ve met some amazing people along the way. This year, our team once again dove head first into the challenge and produced a short film called “Magazine Issues.” 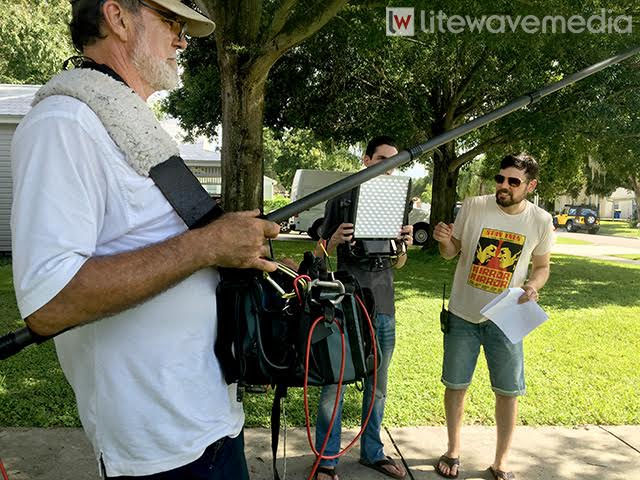 The 48 Hour competition supplies only minimal guidelines for filmmakers, providing a genre, character, prop, and a line of dialogue that must be used in every film. Each team receives their guidelines on Friday night and must turn in their fully finished film Sunday night, only 48 hours later. Our team pulled the genre of “romance,” and writers Jason Henne and Michael Garland went to work forming a cinematic story that also captured the essence of romance. With our writers working through the night on the the script, our Florida video production crew began preparing to film at dawn’s first light. Next, we loaded up our Tampa grip truck and drove to our first location in Clearwater, Florida to begin filming. Using gear from our St Petersburg video equipment rental package like our Canon C300 MkII and Canon cinema lenses, we hit the ground running (literally) and began production! Filming took place at various locations all over Tampa Bay, including our very own Tampa green screen studio for multiple special effects-driven scenes and a wrestling ring almost an hour from the studio. With the clock ticking down, we rushed all of our footage back to our Florida post-production suite for editing. Once our special effects team hustled to compose the visuals needed for the green screen portion of the film, director and editor Christian Cashmir brought the film together with his skill and expertise, cuttin’ up footage and taking names! With the editing finished on literally zero sleep (not even a wink!), finally it was time for submitting the finished film. After waiting for what seemed like the longest 2 weeks ever, it was time for the 48 Hour Film Project ‘Best Of’ screening! With so many great films to compete against, the awards ceremony was a nail biter, but all of our hard work paid off! Our team was nominated in 9 categories and were honored to win the following awards:

We won Best Film out of 34 competitors! Ignite the fireworks! Wookie yell! Rejoice! Our Tampa production company on the red carpet before the premier of our film, “Magazine Issues”

Now that our film “Magazine Issues” has won Best Film – Tampa, we move on to the next round where we’ll compete against the winners from over 100 cities worldwide at Film-a-Palooza in Seattle, Washington next March!

As with every year, we had an amazing time working on the 48 Hour Film Project, and we look forward to competing again next year. Check out our finished film “Magazine Issues” below (Made in just 48 hours)!

The Litewave Media team celebrates after the 48 Hour Awards Screening

Do you have a Tampa independent film or Florida short film you’d like to produce? Contact us today for a consultation. Be sure to like us on Facebook to watch all of our latest videos. Head on over to our blog to stay up to date on all of our Tampa video production company news!